12/21/2019 – With profound sadness, today we recognized the passing of our great friend and colleague, Chris Cote, but celebrate in the joy and happiness he left in the hearts of those who knew him.  Chris unfortunately departed this life on December 17, 2019, as a result of a tragic accident.

Chris was the founder of the North Carolina Business Group on Health, and remained a great friend, adviser and mentor.  He will be missed. 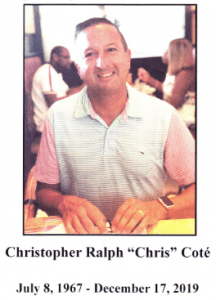 Christopher Ralph Cote, 52, husband of Lisa and father (Dad) of Lauren, Andrew, and Ellie, lived a life of “persistence and determination” and pure passion for his wife and children. He was the youngest of nine children who nicknamed him “King Chris” as a child because he simply lit up people’s lives wherever he went. Unfortunately, an accident occurred and took him to the Lord too soon on December 17, 2019.

Chris so loved his wife, Lisa, and children and spending time with them in everything they did. He was especially happy spending time with Andrew and Ellie walking their dogs, watching their sports, going mountain biking, and especially time with them on the beach watching them surf. Chris was so excited to see his beloved daughter, Lauren, become recently engaged to Roger Moore of Mint Hill, NC. Chris had a special love for Narragansett Beach, R.I., where he was married, where he and his family spent their summers, and nearby where he went to college at the University of Rhode Island.

Chris was Vice President of Optum UnitedHealth Group and exemplified his favorite quote by John D. Rockefeller, “A friendship founded on business is better than a business founded on friendship.” In recent years Chris became an enthusiastic walker, walking up to 10 miles a day, Starbucks in hand, before and after work. These walks became spiritual to Chris, where he connected with his family, friends, and colleagues. Chris believed strongly in all aspects of the United States of America, was a fan of President Donald Trump and the Make America Great Again (MAGA) campaign.

Chris is survived by his wife, Lisa; his three children, Lauren, Ellie, and Andrew; plus twenty-seven nieces and nephews. Chris will be dearly missed by siblings: Donna Gaumond and her husband, John. of Cranston, RI; Michelle Adams and her husband, Ken, of Naples, FL: David Cote and his wife, Betsy, of South Kingstown, RI; Douglas Cote and his wife, Jennifer, of Avon, CT; Laurie Cote of Coventry; Lisa Cote of Newport, RI; Paula Horley of Jamestown, RI, and Susan Bleuel of North Kingstown, RI.