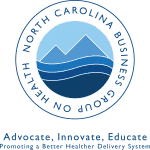 Charlotte, NC – May 19, 2022 – In North Carolina, the prices paid to hospitals for privately insured patients by employers averaged 266% of the amount Medicare pays, an estimated 79% more than hospitals’ breakeven point – the amount a commercial health plan would need to reimburse a hospital to cover its expenses.  Inpatient care averaged 211% and outpatient care 331%.  The North Carolina Business Group on Health (NCBGH) a nonprofit representing employer purchasers of healthcare, released these findings for North Carolina based on the RAND Corporation study issued Tuesday and recently released data from the National Academy for State Health Policy (NASHP).

The examined claims data from employers, private insurers, and 11 state all-payer claims databases for more than 4,000 hospitals and 4,000 additional ambulatory surgical centers across 49 states and the District of Columbia. It found that hospitals, on average, are charging employers almost three times what they are charging for the same services under Medicare. An independent analysis released by NASHP last month found hospitals, on average, require only 127% of Medicare to breakeven.

“It’s no secret that employers and employees have been paying more than what is reasonable for care – often with no impact to quality,” said Jon Rankin, president and CEO of NCBGH.  “The new price and cost data representing nearly $1.4 billion annual claims paid by North Carolina employers shows just how much we’ve been overpaying and is essential to changing the dynamics for employers and other purchasers across the state.  Rather than funding increased profits and hospital consolidations, we need health systems to be responsive to affordability concerns and more responsible with plan sponsor resources.

The RAND and NASHP data, along with statistics from the Center for Medicare and Medicaid Services Turquoise Health and Healthcare Bluebook, is also now available for review in the newly released Sage Transparency dashboard. The first-of-its-kind tool was developed by the Employers’ Forum of Indiana and brings together public and proprietary data on hospital pricing and quality from hospitals across the country. “We’ve finally accessed the black box for hospital performance, and it reveals wide variation in prices, quality and often unjustifiable margins among hospitals,” said Michael Thompson, president and CEO of the National Alliance of Healthcare Purchaser Coalitions. “Employers must act quickly and decisively to use this information to exert pressure on their health plans and hospitals to negotiate contracts and networks, and with legislators to drive policy changes.”

A playbook to assist employers and other purchasers to act on this new price information in keeping with their fiduciary responsibility will be released shortly by the National Alliance and the North Carolina Business Group on Health.

About North Carolina Business Group on Health: Founded in 2011, NCBGH is a non-profit coalition of employers and other key healthcare stakeholders across the state using their collective voice to influence decisions and impact the quality and cost of healthcare delivery systems across North Carolina. For more information, visit https://ncbgh.org